Success for both FLL & VEX!

On October 25th, both the FIRST Lego League (FLL) teams and the VEX Robotics teams in the Haslett Robotics Club were recognized for their skills in robot design, programming, and research.

The four Haslett VEX Robotics teams had great success this past weekend at the Grandville State Qualifier tournament. The VEX Vortex team was awarded the highest honor, the Excellence Award. They are now qualified for the State VEX tournament, along with the Raptors team that won the Excellence award at a tournament in August. Also at the Grandville competition, the Raptors team won the Design Award and 2nd place Programming Skills, the Dragons team won Robot Skills Champion Award, and an alliance of three Haslett teams (the Vortex, the Raptors, and the Minotaurs) were finalists in the tournament matches.

In the image below, the VEX Vortex, Raptors, and Dragons display their trophies and robots.

The three competitive FLL teams also competed last weekend, at the practice competition in Flint. We were thrilled that Coach Todd Wilson was awarded with the “Outstanding Coach/Mentor Award” this year. This is our second year in a row in which one of our coaches was recognized with this honor–Steve Sneed won at least year’s regional qualifier.
Our teams also did very well. The Weapons of Math Instruction received an award for Robot Design & Innovation, and the GearGirls (our all-girl team) received trophies for Gracious Professionalism and Team Spirit. While our third team (the LEGO Storm), did not capture any awards, they performed admirably and demonstrated excellent teamwork.
The GearGirls: 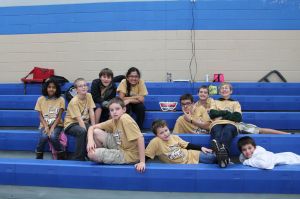